Thousands of households across England will see energy bills reduced by up to £200 a year as government announces £67 million to install insulation and clean heating. 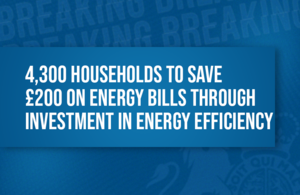 Thousands of low-income households across England will see their energy bills reduced by up to £200 a year as the government announces £67 million to upgrade insulation in homes and install low-cost clean heating.

The funding announced today (Monday, 21 February) forms part of the government’s Home Upgrade Grant (HUG) scheme and will be allocated to local authorities across England to improve up to 4,300 low-income, off-gas grid households – which are reliant on alternatives such as bottled gas and oil to heat their homes.

Grants will pay for energy efficiency measures such as wall and roof insulation as well as new low-carbon heating systems, thermostats and room heating controls, expected to be delivered before the end of March 2023.

The money will help people who are most vulnerable to fuel poverty, who are on low incomes and living in off gas grid privately-owned homes – both rented and owner-occupied – with upgrades helping to reduce their bills and make their homes warmer.

It is the first round of funding from a total of £950 million that was allocated to the HUG scheme by the government last year and will be available over the next 3 years to 2025.

Around 1,300 jobs in the green energy sector will be supported as a result of this latest funding.

This funding will make a real difference to thousands of low-income households – saving them up to £200 a year on their energy bills through upgrades like better insulation.

This is just the first round of the £950 million funding we have committed over the next 3 years and will ensure we help those most in need. It will keep more money in people’s pockets, at the same time as making homes warmer, more comfortable and greener.

The £67 million of HUG funding will go to 22 local authorities across England and builds on the Sustainable Warmth Competition in December, which saw £152 million allocated to more than 250 other local authorities to drive improvements in the energy efficiency of homes. Energy efficiency upgrades from funding announced today will be delivered before the end of March 2023.

It will further contribute to government commitments to tackle fuel poverty by ensuring that as many fuel poor households as possible achieve a minimum Energy Performance Certificate (EPC) rating of Band C by 2030. Since 2010 the number of low-income households living in the least energy efficient homes has fallen by 1.3 million.

The funding is part of the £6.6 billion the government is investing this parliament to decarbonise buildings, of which over £2 billion is aimed specifically at lower-income households. This will play a significant role in helping the UK to reach its world-leading climate change ambitions and, with upgraded insulation making it easier to keep homes warm, it will save people money on their energy bills.

It also follows the government’s recent announcement of a £9.1 billion package of support to help households with rising energy bills. This includes a £150 non-repayable rebate in Council Tax bills for all households in Bands A-D in England and £144 million of discretionary funding for local authorities to support households who need support but are not eligible for the Council Tax rebate.

There will also be a £200 discount on household energy bills this Autumn for domestic electricity customers in Great Britain, which will be paid back automatically over the next 5 years – spreading the cost of the increase in the energy price cap, given the financial pressures households across the country are facing.

These new measures are on top of the existing £21 billion support the government is providing for the cost of living this financial year and next. This includes reducing the Universal Credit taper rate, raising the National Living Wage, freezing alcohol and fuel duties and providing targeted help with energy bills.

Huge progress is already being made to increase the energy efficiency of UK homes. In 2010, just 14% had an Energy Performance of C or above, however it is now at 46% and rising, with the social housing sector up from 18% in 2008 to around 66%. Energy efficiency improvements are one of the most effective ways to save money on energy bills at a time of rising global gas prices.

Government has allocated a total of £1.1 billion to the Home Upgrade Grant, with delivery taking place from early 2022 to March 2025.

Local authorities that received HUG grants from the £152 million under the Sustainable Warmth Competition in December 2021.

Sustainable Warmth is a funding opportunity that launched in the summer of 2021 to bring together 2 fuel poverty schemes, with delivery taking place from early 2022 to March 2023: