Millions to receive £350 boost to help with rising energy costs 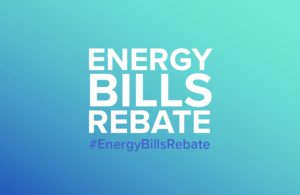 Millions of households will receive £350 of government support to help protect them from rising energy costs, the Chancellor announced today.

Recognising that growing cost of living pressures was the “number one issue on people’s minds”, Rishi Sunak said this package would support hard working families.

The Energy Bills Rebate will provide around 28 million households with an upfront discount on their bills worth £200. Energy suppliers will apply the discount to domestic electricity customers from October, with the Government meeting the costs. The discount will then be automatically recovered from people’s bills in equal £40 instalments over the next five years. This will begin from 2023, when global wholesale gas prices are expected to come down.

Households in England, which are in council tax bands A-D, will also receive a £150 rebate. The rebate to bills will be made directly by local authorities from April. This will not need to be repaid. This one-off payment will benefit around 80 per cent of all homes in England and is £1 billion more generous and more targeted towards lower-income families than a VAT cut on energy bills.

On top of this discount, discretionary funding of £144 million will also be provided to support vulnerable people and individuals on low incomes that do not pay Council Tax, or that pay Council Tax for properties in Bands E-H.

Right now, I know the number one issue on people’s minds is the rising cost of living.

That’s why the Government is stepping in with direct support that will help around 28 million households with their rising energy costs over the next year.

We stood behind British people and businesses throughout the pandemic and it’s right we continue to do that as our economy recovers in the months ahead.

During the pandemic this Government has acted decisively to protect jobs and livelihoods, particularly for those on the lowest incomes.

But today we recognise the real and growing concerns people have about the cost of living – and once again we are taking action.

We are delivering a new package of targeted support to help with the financial pressures felt by families right across the country, with additional help for those most in need.

This builds on the changes we’ve made to Universal Credit to put £1,000 more per year into the pockets of hardworking people and the increase to the National Living Wage to advance our vision for a high-wage and financially secure Britain.

The support package comes after energy regulator Ofgem today announced an increase to the energy price cap as a result of the soaring global wholesale price of gas, which has quadrupled in the past year.

This will see almost a £700 increase in energy bills for the average household from April 1 – but, as a result of the targeted Energy Bills Rebate, the vast majority of households will receive £350 to reduce this cost.

The Chancellor also today confirmed plans to go ahead with existing proposals to expand eligibility for the Warm Home Discount by almost a third so that three million vulnerable households will now benefit, as well as the planned £10 uplift to £150 from October. This follows a consultation by the Department for Business, Energy and Industrial Strategy to reform the policy so that more people will benefit.

Devolved governments in Scotland, Wales and Northern Ireland are expected to receive around £565 million of Barnett funding as a result of the Council Tax Energy Rebate in England. While for energy bills, Northern Ireland will be funded to provide comparable support with around £150 million through the Barnett formula next year.

The Government has delivered a record 500 per cent increase in the amount of renewable energy capacity connected to the grid since 2010. It will provide up to £1.7 billion of direct government funding to enable at least one large scale nuclear project by the end of this parliament. The oil and gas industry continues to play an important role in society as we transition to net zero. However, the present global situation underlines the need to go further to ensure the UK’s clean energy independence, and to protect consumers into the future.

The Government is therefore doubling its efforts to generate more clean, affordable power in this country to meet the target of decarbonising Britain’s electricity system by 2035. So far through the Contracts for Difference (CfDs) scheme, it has successfully awarded contracts totalling almost 16GW of new renewable electricity capacity across multiple technologies, helping to decrease costs of renewable generation significantly.

Today’s energy intervention comes on top of the £12 billion support package the Government is already providing to ease growing cost of living pressures. This includes Cold Weather and Winter Fuel Payments, increasing the National Living Wage to £9.50 in April and providing an effective tax cut for those on Universal Credit – allowing 1.9 million households to keep an average of £1,000 per year.